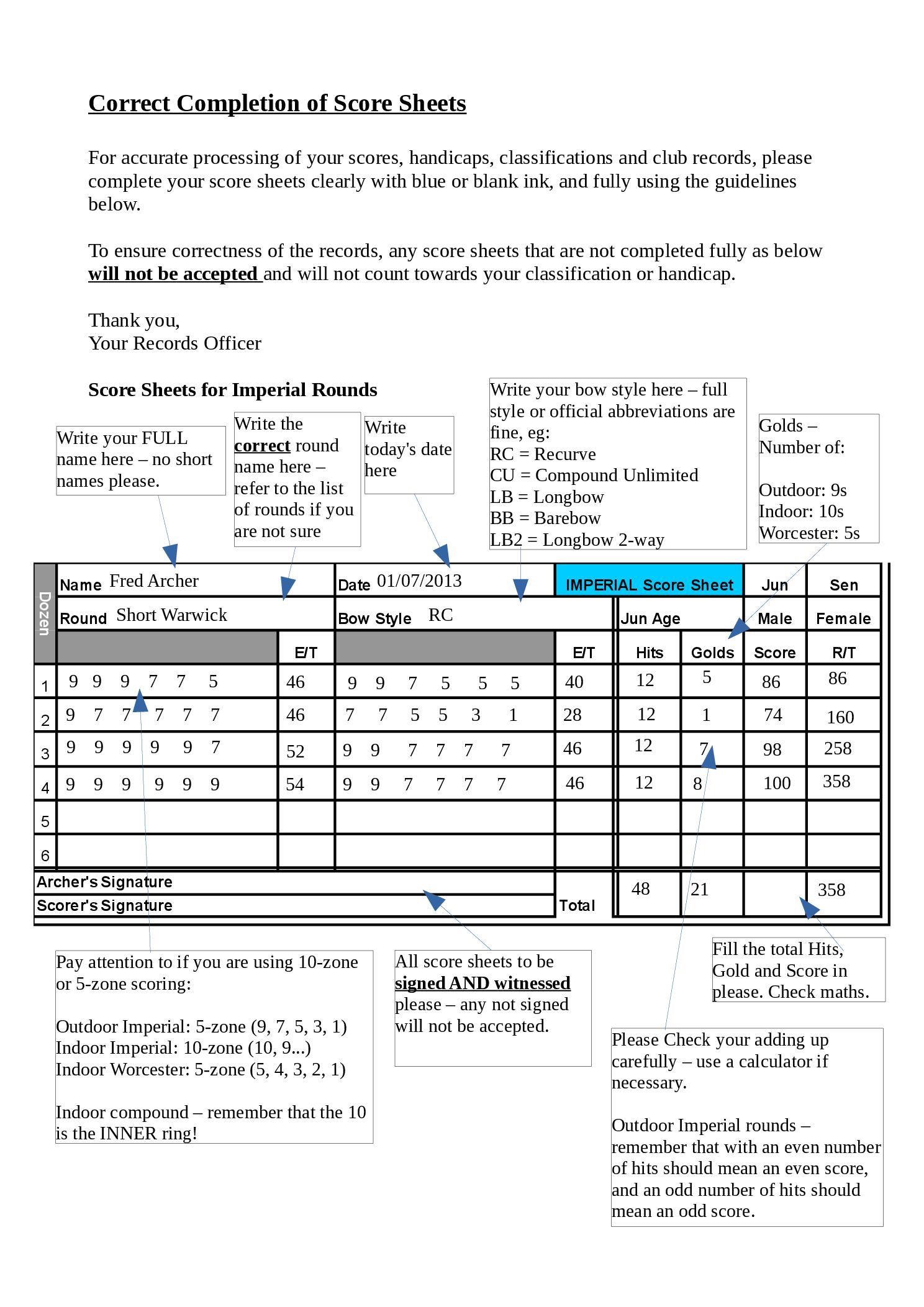 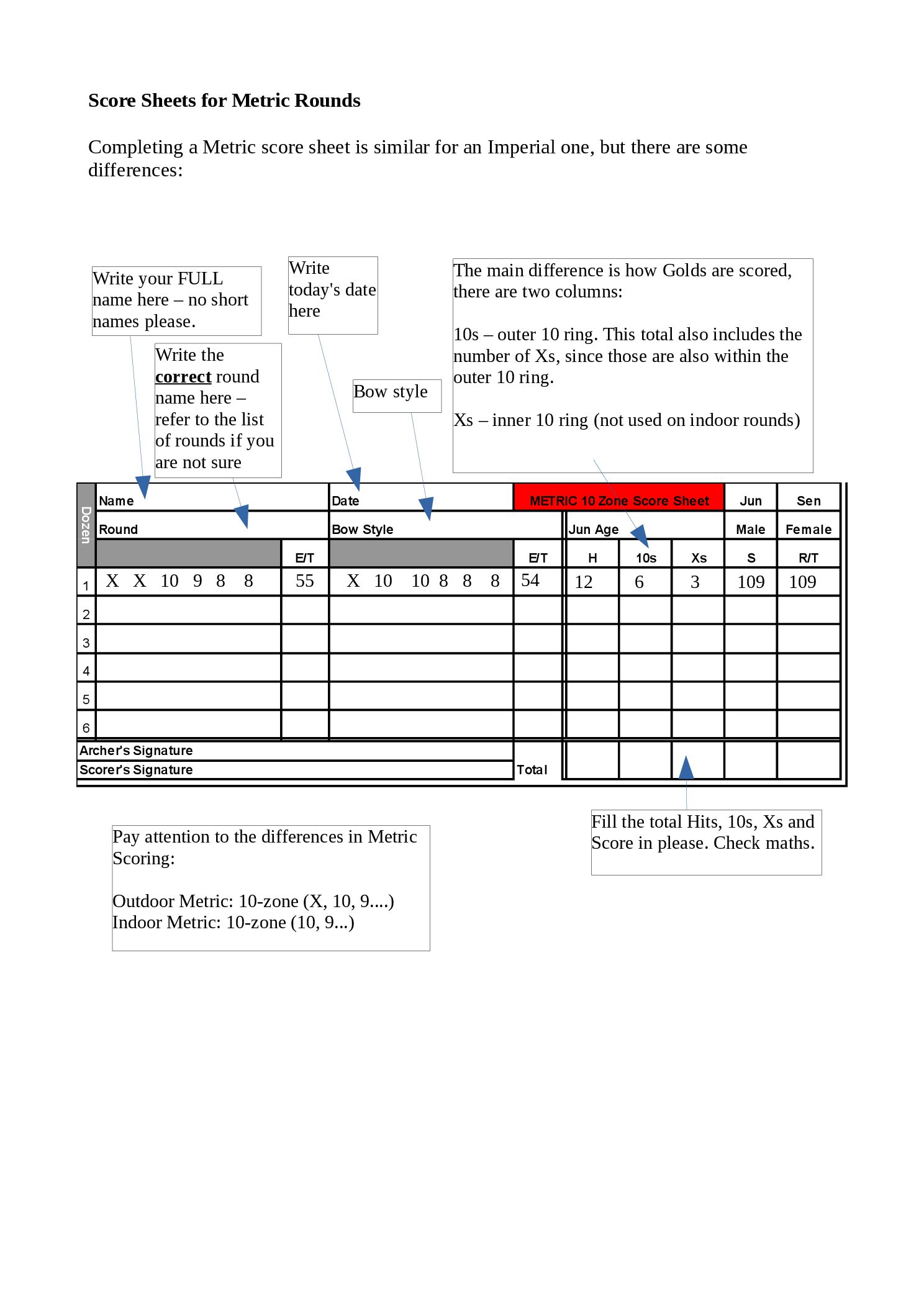 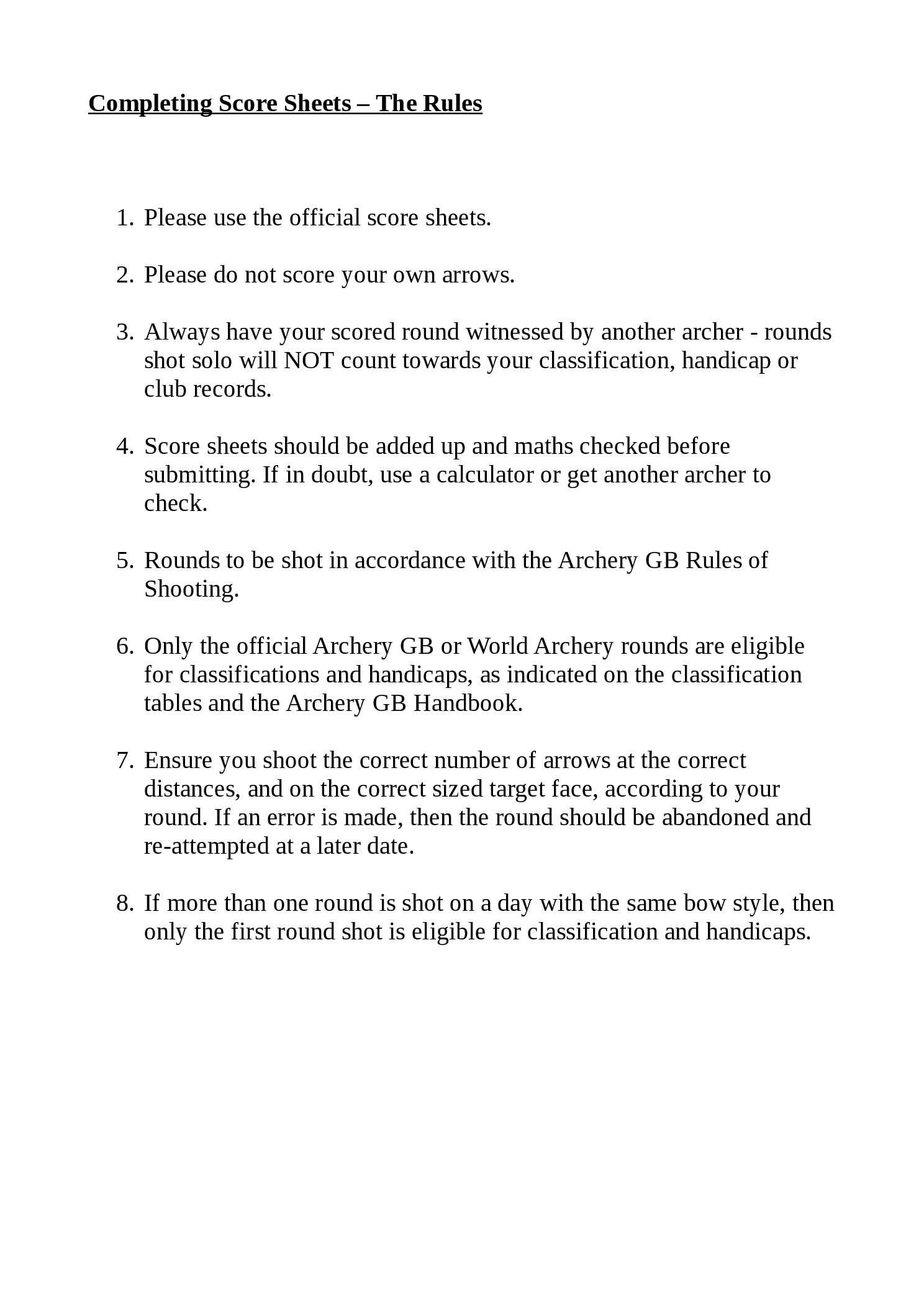 A reminder to all: When shooting rounds, even at the club, it is a good idea to practice the correct rules and etiquette that are expected at tournament level. Remember: there is not a race to shoot all your arrows as quickly as possible. You should develop your own speed and rhythm necessary to shoot each arrow as effectively as you are able.

After ‘detail B’ has shot their first three arrows, then ‘detail A’ step forward again to shoot their remaining three arrows within another two and a half minutes.

When the line is vacant yet again, ‘detail B’ shoot the last arrows of the end.

Altogether a total of up to ten minutes has been allowed for everyone to shoot their six arrows.

Recent changes to the above are now being practised. See below:

a.Shooting shall be in timed ends controlled in the following manner:

a. Two audible signals for archers in the first detail to take their positions on the shooting line
b. After 20 seconds one audible signal for shooting to com­mence
c. After 4 minutes (if 6 arrows are to be shot) or 2 minutes (if 3 arrows are to be shot). or earlier if Shooting line is clear 2 audible signals indicate that the archers remaining on the shooting line shall retire and the next detail take their place.
d. After 20 seconds one audible signal for the second detail to commence shooting.
e. And so continue until all details have shot when 3 audible sig­nals shall indicate that archers are to move forward to score and collect arrows
f. An arrow shot before or after the allotted time will be consid­ered as part ( of that end and will cause the archer to lose the highest scoring arrow of that end which will be scored as a miss.
g. The time allowed for an archer to shoot each make-up arrow shall be 40 seconds.

Only ONE end of six sighters is allowed at the farthest starting distance of a round on any one day. NO other sighters are allowed on that shooting range on that same day. You are NOT allowed several practice ends and then start to score. This would invalidate the round. You must make up your mind at the start as to whether you intend to shoot a proper round and only shoot the six arrow sighters that are allowed, before you start to record your score.

Six Gold End for Imperial Round

tournaments To qualify for the GNAS ‘Six Gold End’ award: the six arrows must be shot in two separate three arrow ends (leaving the shooting line between each three)

N.B. It may be that when shooting the longer distances of some FITA Metric rounds (particularly at a record status event) that four minutes are allowed to shoot all six arrows without leaving the shooting line. This will be stated on the entry form for the event.

N.B.At some FITA events, a period of forty five minutes may be allowed for several sighter ends before the event begins.

When shooting under the FITA rules, then a ‘Six Gold End’ award may be gained by shooting all six arrows without a break.

Remember to be considerate to other archers – don’t rush – but don’t dally.

Shooting rounds to gain a classification

A ’round’ is the name given to shooting a total of several dozen arrows at targets set at varying distances.

For instance: a NATIONAL Round is shot as follows:

Usually, only one round can be shot and recorded in any one day.

By matching the total score for the round with the score in the ‘Handicap Tables’, the handicap number and classification for that particular round can be worked out.

Beginning archers will start without a handicap number or classification.

After shooting three rounds it is possible to work out an average handicap number and if exceeding the threshold scores in the tables for any given round, a classification may be attained. A threshold must be shot three times (not necessarily the same round) to qualify.

The higher an archers’ score, the higher the class attained.

There are a lot of different ‘Rounds’. Each round comprises a set number of dozen arrows shot at targets ranging from 20 yards to 100 yards. These rounds have names such as: York: Hereford: Bristol: Windsor: etc.

Some rounds are at distances that young junior archers can reach. Some are at distances more suitable for senior archers to shoot. Every time a round is completed, hand the recorded score to the club Records Officer, who will keep track of and record the progress made by each member of the club.

All club archers would benefit from making themselves familiar with the rules of shooting, and associated handicap tables from the Archery GB website.  In addition, all the rounds and classification tables can be found on our classifications tables page

To achieve your initial h/c number you will have to shoot three recognised ‘Rounds’ on three separate days.

Each completed round scored correctly and handed to the Club Records Officer will be recorded.

All three h/c values are then added together and then divided by three to give an average number. This number would then be your initial handicap rating.

Your next h/c number that is a lower value (the better you shoot -the lower the number) is added to your initial number and then the sum of the two is divided by 2 to give you a new lower h/c.

Each time a lower number is achieved, it is again added to the previous h/c and divided again by 2.

For scores falling between two h/c values, the higher value is used.

In the classification tables, are score thresholds for Ladies or Gents of each category of bow style.(Recurve Freestyle, Compound Unlimited) and each age range for junior archers.
Each gender, age and bow style has a corresponding score threshold for a classification for each round.
i.e. Outdoor:- Third Class, Second Class, First Class, Bowman, Master Bowman or Grand Master Bowman. The outdoor season is from 1st Jan. to 31st Dec. each year.
Indoor Classifications are:- H,G,F,E,D,C,B,A. The indoor season is from 1st July to 30th June each year.
Only when three scores of three rounds shot on different days, are equal to or greater than the thresholds required for a given class, have you become an archer with that classification. Each of the three Qualifying rounds may be different rounds but have to be shot within the same season.

All this becomes abundantly clear when you start to record your scores and have your own Rule / Handicap Book to refer to.

Just remember that it will be unlikely that every round shot will be better than the previous one. Your standards will most likely vary, sometimes wildly. Don’t be disheartened. Just try to make each shot feel the best yet. You will improve.

Whatever, ENJOY YOUR SHOOTING and remember to show good humour and consideration.